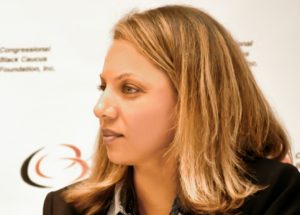 A nationally known thought leader and social activist, Lisa Fager is the Director of Public Policy and Operations at Hip Hop Caucus.  She oversees the policy agenda and advocacy campaigns; and works with key policy makers, local, state and national coalitions to advance policies and engage communities in the process.  Prior to this, Ms. Fager consulted on civic and public health issues through her Free Mind venture and had a broad array of clients including the Congressional Black Caucus Foundation, National Coalition on Black Civic Participation, Comcast Universal, Def Jam Records, National Organization of Black County Officials and Hip Hop Voices.  Ms. Fager began her career in the entertainment industry working in various marketing and public affairs roles with CBS Radio, Capitol-EMI Records, and Discovery Communications, Inc. (DCI).  During her tenure at Discovery Communications she co-founded the Discovery Diversity Forum (DDF), an employee-led organization to help mid-level managers of color advance at DCI; this led to a formal implementation of a corporate diversity program that is still in place. She is also the co-founder of Industry Ears, a nonprofit media watchdog group founded to address the impact media has on communities of color.  She has testified before the U.S. Senate Commerce Committee and the U.S. House of Representatives Subcommittee on Commerce, Trade and Consumer Protection on the Federal Communications Commission’s lax stance towards negative and bias content directed at communities of color.  Ms. Fager has also been featured as a guest in national media outlets, including McLaughlin One-on-One, USA Today, Billboard Magazine, Essence Magazine, The Crisis magazine, Philadelphia Inquirer, CNN and The Washington Post. She serves as a board member for the Red Pump Project, a national nonprofit organization that raises awareness about the impact of HIV/AIDS on women and girls and served on the organizing committee for the 2013 Black Youth Project that launched the millennial Black activist group BYP100. She received her BA in English Literature at the University of Maryland and her MBA at The Johns Hopkins University.  She resides in the Baltimore-Washington metro area.