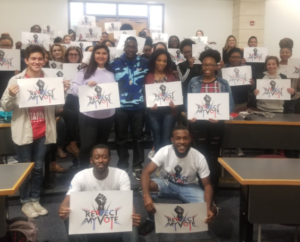 Washington D.C. – Respect My Vote! kicked off a final push to make sure people across the Commonwealth are registered to vote ahead of the November 7th elections. The campaign is promoting young Virginia media, artist, activist and social media influencers as spokespeople.

Last Friday marked the 100th birthday of the civil rights leader Fannie Lou Hamer and the campaign joined the civil rights community to call for people to honor her by registering to vote. Rev Yearwood, Hip Hop Caucus President & CEO, wrote an op-ed in RVA Magazine connecting her spirit to the importance of voting in the upcoming Virginia elections. This year’s Virginia campaign is being lead by No Malice, formerly of the acclaimed rap duo The Clipse and Virginia Beach native. The deadline to register in Virginia is October 16th, and people can do so by visiting RespectMyVote.com.

For more information and to stay updated, check out: 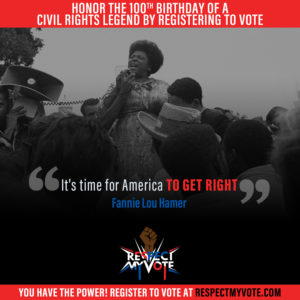 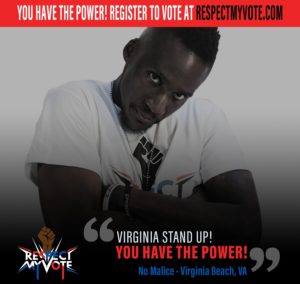 Respect My Vote! was first launched in 2008 and has since engaged millions of people during election cycles throughout the United States . Through partnerships with nonprofits, businesses, media and entertainment companies, and celebrity spokespeople, the campaign focuses on voter registration, voter education, get-out-the-vote, and voter rights . Spokespeople have included Vic Mensa, T.I., Charlamagne tha God, Keke Palmer, 2 Chainz, Amber Rose, Future, and hundreds of other artists and community leaders. Respect My Vote! is a non-partisan, voter registration, education, and mobilization campaign of the Hip Hop Caucus

Formed in 2004, the Hip Hop Caucus (HHC) is a non-profit, non-partisan organization that connects the Hip Hop community to the civic process to build power and create positive change. Through a collaborative leadership network and support of community-driven solutions, HHC focuses on addressing core issues affecting underserved and vulnerable communities. HHC hopes to establish the culture and practice of voting as part of a desired civic lifestyle, as well as empower and train leaders and volunteers from our communities to be strategic leaders, messengers, and spokespeople for issues critical to equality, justice, and opportunity . More at HipHopCaucus.org.